Red Tides are Sweeping the Southern Coast, and Northern Lakes are ravaged by Algal Blooms. How Does this Affect Kayakers?

Red Tides are Sweeping the Southern Coast, and Northern Lakes are ravaged by Algal Blooms. How Does this Affect Kayakers?

From southern Florida to the Great Lakes, from the long, thin Finger Lakes to the rugged Utah landscape, there’s something dangerous lurking in the water. It’s not piranhas, sharks, or alligators, but rather something far more insidious.

For kayakers and water-sports enthusiasts, HABs are nothing to ignore. In fact, health officials want to warn water-goers of the dangers, and we’re here to lay out the facts so you can paddle safely and responsibly.

What are harmful algal blooms (HABs)?

A variety of microorganisms live in both fresh and saltwater. Under the right conditions, colonies of these algae explode in number, rising to millions per liter of water. When that happens, there can be some pretty dire consequences, resulting in HABs.

HABs occur when conditions are favorable—think unusually high water temps. They also occur when algae get ‘overfed,’ a result of added phosphorus and nitrogen flowing into bodies of water—a common byproduct of farming.

In Florida, the culprit is Karenia brevis, a microscopic creature native to the warm water of the Gulf of Mexico. When the Gulf gets near the temperature of a relaxing bath, and agricultural runoff makes its way from fields to streams and the sea, the shallow waters near shore become incredibly hospitable for these dinoflagellates—a fancy term for marine (and sometimes freshwater) plankton.

When sufficient quantities of these tiny creatures are suspended in the Gulf, they give this phenomenon its characteristic name: a ‘red tide.’

HABs in the Great Lakes

In freshwater bodies like the Great Lakes, Utah Lake, and the Finger Lakes, by contrast, the threat is a genus of cyanobacteria, Microcystis. These microscopic algae are filled with gas, and, in warm, nutrient-dense water fed by phosphorus, they can ‘bloom,’ creating huge sheets of floating green goo.

Like K. brevis, these algae can produce deadly toxins that are easily transmitted by touch or by swallowing a mouthful of water when you tip your ‘yak unexpectedly.

So, what are the actual dangers with HABs?

And that’s leaving out a lot of other negative effects, like the ensuing economic implications and environmental hazards.

What’s the threat for kayakers, specifically?

In a word, significant.

You may have heard that you’re safe from the ‘red tide’ as long as you avoid eating shellfish. That’s simply not true. While the fear of neurotoxic shellfish poisoning (NSP) is very real, brevetoxins can be transmitted by direct contact with contaminated water, by breathing salt spray, or by failing to fillet fish properly.

Perhaps the greatest threat is that even swallowing a bit of water with dangerous concentrations of K. brevis can cause major issues. Imagine unexpectedly rolling your kayak in the surf and swallowing a bit as you choke. That’s not an impossible scenario, as experienced kayakers know, and it’s enough to make you sick.

According to the National Capital Poison Center, “Swallowing the water can cause nausea, vomiting, diarrhea, and abdominal pain.”

Unfortunately, brevetoxins can also be spread by breathing aerosolized particles in sea spray—the fine mist created by waves and blown by the wind. This can especially affect those who suffer from conditions like asthma, as these toxins can quickly affect breathing and cause serious illness.’

And the dangers of HABs are becoming more pervasive. In Utah and Lake Erie, water tests recently revealed levels of Microcystis that closed some areas for recreation.

And the list of lakes in New York state suspected of algal contamination is troublingly long. Much like those in ‘red tides,’ these toxins are most dangerous when ingested.

More research is needed to know exactly how dangerous these cyanobacteria can be, but a fact sheet from the Center for Disease Control lists a range of symptoms running from skin irritation to gastrointestinal distress to possible liver and kidney damage. We also know that more than a few dogs have been killed by ingesting contaminated water.

What can you do to protect yourself?

It’s important that you realize the risks and minimize your contact with the water. The best and most effective precaution is to forego recreational activities in affected areas.

Check water reports ahead of time by contacting the local wildlife or fisheries agency and use your judgment when you arrive!

If you do decide to paddle, be careful not to ingest any water—and make sure your pet doesn’t go for a swim or take a sip along shore. If you want to fish from your kayak, avoid obviously contaminated water.

Catch and release is the best policy. It’s also recommended you wash with soap and water as soon as you can after your paddle.

But if you’re set on eating your catch, clean it carefully. In saltwater, you need to fillet any finish you wish to eat as the toxins are concentrated in their stomach and intestines.

In freshwater, the Oregon Health Authority advises that you should “remove the fat, skin and organs before cooking,” without cutting into the organs. But personally, all these precautions, dangers, and risks don’t make us overly stoked to get in the water.

The only way to guarantee your health is to stay off the water in places that are affected. But that means you need to know whether you’re chosen location has been impacted, and you should check with your local wildlife and fisheries agency and do your homework before you take your kayak out.

If you decide to take the risk, forewarned is forearmed, and you should follow these basic measures to keep yourself safe.

Enjoyed Red Tides are Sweeping the Southern Coast, and Northern Lakes are ravaged by Algal Blooms. How Does this Affect Kayakers? Share it with your friends so they too can follow the KayakHelp journey. 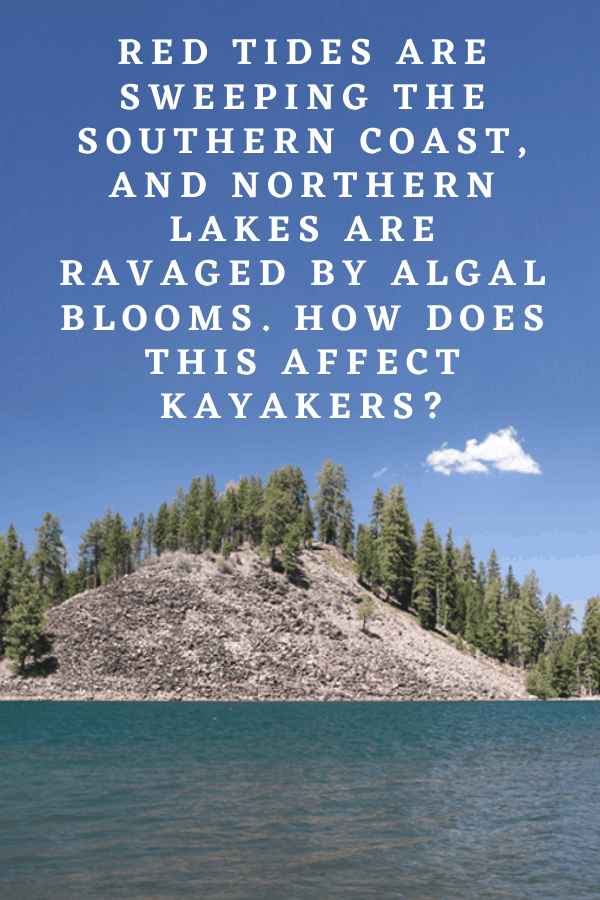