The HI-rescue is a useful rescue technique if you have two kayaks to help.One of the things that you should do before you go kayak touring is to make sure that you know all of the necessary methods for helping yourself and other people who may be in the water.

While it’s always useful to know how to do certain rolls like the eskimo roll, that is not necessarily realistic, and not everybody will know how to do this roll. Not only that, for various reasons, it’s always possible that the roll won’t work for somebody who needs it, at which point alternate techniques may be necessary, including the HI-rescue technique.

Unlike the T-rescue or X-rescue techniques, which can be performed by only one kayaker beyond the person who is being helped, the HI-rescue technique actually requires two kayaks to perform.

However, this is a very useful technique, because if you are kayaking in a small group you’ll have enough people to do what is needed, and you’ll also find that this is one of the more effective methods for getting all of the water out of a kayak while you’re on the water.

The reason that this is one of the more effective methods is that this method actually involves picking the entire kayak out of the water and turning it over so that the water can drain out.

In both the X-rescue and the T-rescue techniques, the kayak is turned on its side or upside down by only one other kayaker while part of the kayak is still in the water. It’s always possible that after one of these other techniques there is lots of water left in the kayak.

The HI-rescue is not difficult to perform. First of all, both of the rescuing kayaks need to move up near the capsized kayak.

Since this procedure will involve picking the capsized kayak entirely out of the water, make sure that the person who had been paddling that kayak grabs onto one of the rescuing kayaks, so that they are not separated from the group.

By rocking the kayak from side to side, you’ll be able to get most, if not all, of the water out. Then you’ll be ready to put the kayak back in the water and help the other person get back into their kayak. 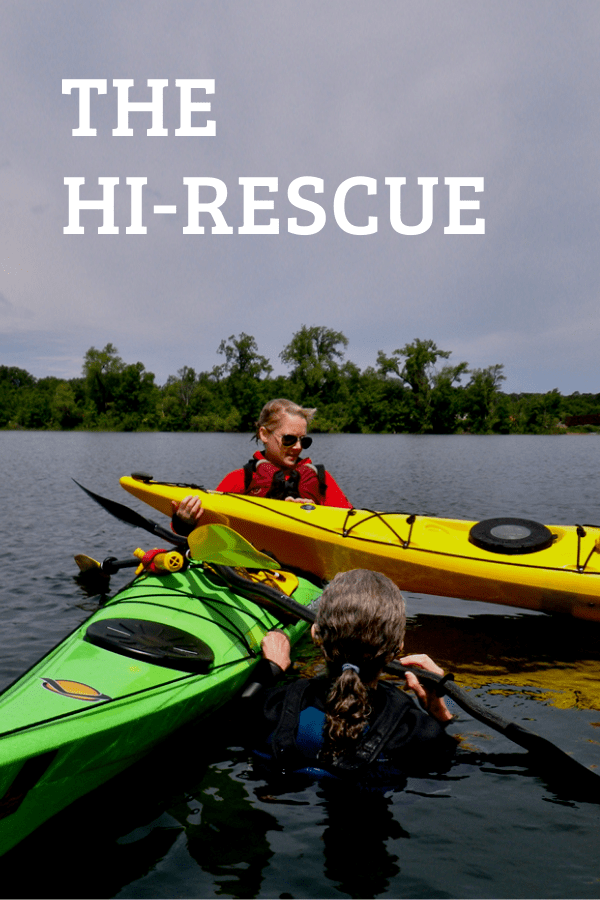