Inflatable kayaks are a great alternative to traditional boats. They’re compact, easy to transport, and often more affordable than their plastic or fiberglass counterparts. There are a ton of inflatable kayaks on the market, including the Intex Explorer K2.

It’s a low-cost, two-person kayak that’s perfect for an easy day on the water. It comes with an air pump and paddles, too, so you’ll be set to take it out and immediately start paddling. This kayak is a fantastic option for beginners or those looking for a portable option to take out on lakes or calm rivers.

The vinyl exterior is durable and can handle getting pushed off of rocks or paddling over debris.

Occasionally, customers have complained that the boat has come with holes in the seams or has developed holes over the course of its life. The paddles have been reported to be flimsy, too.

But generally, it holds up well. It won’t last nearly as long as a plastic kayak, but seems to effectively perform for a budget alternative.

Inflatable kayaks can get a bad rap for being flimsy and unreliable, but I think the Intex Explorer is well-designed. The structure of the kayak involves two separate air compartments.

While it’s not sink-proof by any means, having two compartments means that if you do end up getting a hole in the vinyl, the entire kayak won’t suddenly burst.

This makes it easier to get back to shore before you get soaked. The I-beam down the center does a strong job of keeping the boat stable and rigid, even with two adults sitting in it.

If you’re paddling on calm rivers and small lakes, this kayak will perform well. It’s easy to paddle and maneuver. The removable skeg adds the option for increased directional stability.

But in rough water or windy conditions, the boat becomes tricky to keep in a straight line. Even with the skeg support, the buoyant nature of the inflatable kayak makes it easy to be impacted by the wind. However, the boat is impressively stable and hard to tip over.

If you do capsize or decide to hop out of the boat for a swim, it’s simple to re-enter the boat from the water. It’s a perfect option for beginners or light paddlers who won’t be making serious maneuvers.

One of the biggest selling points of inflatable kayaks, in addition to their compact size, is their price. While there are of course exceptions, in general, inflatable boats are cheaper than their hard-shell counterparts.

The Intex Explorer K2 is an excellent option for those on a budget, since it comes with both a pump and two paddles. Are fiberglass sea kayaks better quality than this? Absolutely.

But if you’re just looking for a casual kayak for an afternoon on the lake, you don’t want to shell out $4,000. For what you get with this kayak, it’s a terrific value.

How does it compare to other options? 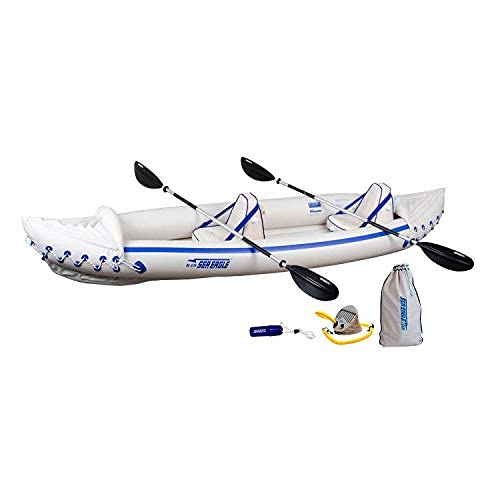 Check Price On Amazon
The Sea Eagle is more expensive than the Intex Explorer K2, but it comes with many added features. It can hold up to three people or 630 pounds, making it more versatile and durable.

The kayak set comes with a pump, two skegs, carry bag, paddles, and repair kit. It also has an inflation gauge on the side so you’ll never over-inflate the kayak. The Sea Eagle is similar to the Intex in terms of durability and longevity, but you do end up paying more for this.

Check Price On Amazon
This kayak is on the higher end of the price spectrum, but it’s a step above in terms of quality, too. The Advanced Elements boat has aluminum ribs built into it that give the kayak more stability and structure.

They also make it easy to maneuver. The kayak has multiple layers of material so it’s unlikely to puncture. In terms of paddling, this kayak moves like traditional hard-shell kayaks and is easier to paddle straight.

However, it still maintains the benefit of being easily stored and transported. The major drawback of this boat is that it’s more expensive than the Intex Explorer K2.

This kayak is in the same price range as the Intex Explorer, but is geared toward those who want to fish or hunt from their boats.

The Sevylor Tahiti boat can hold more weight and has splash covers to keep you dry, which is a nice feature. It also has a carry bag so you can easily transport it once it’s deflated.

But on the downside, the boat doesn’t come with a pump, skeg, or paddles. Lastly, customers don’t report it’s as durable as the Intex Explorer K2.

Enjoyed Intex Explorer K2 Kayak Review? Share it with your friends so they too can follow the kayakhelp journey. 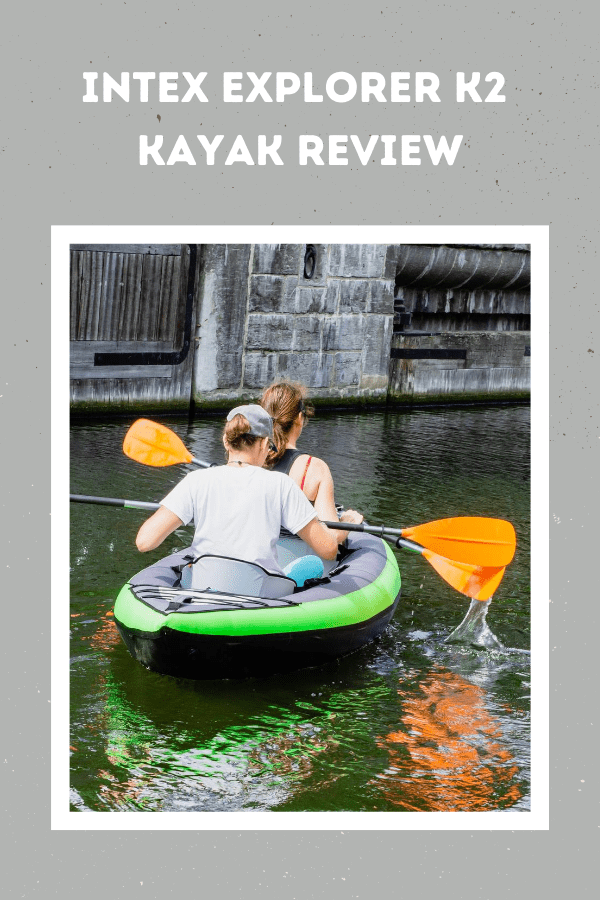 Author: Caitlin FairtyCaitlin is a BCU certified kayak instructor who has been paddling for most of her life. From the coast of New England to the Great Lakes and the canals of Venice, kayaking has taken her around the globe. She now lives in San Diego where she works as a freelance writer. Her other hobbies include reading, hiking, playing piano, and searching the city for the best tacos.