The kayak is a timeless craft that remained basically unchanged for thousands of years prior to visionary Tim Niemier’s creation of the first sit-on-Top kayak, which was introduced to the marketplace in 1978.

As more and more sit-on-top kayak enthusiasts began to realize the potential for undertaking more extensive and adventurous journeys, they quickly discovered that their range of travel was essentially limited only by the degree of strength and endurance they possessed.

The need for additional support in this regard eventually inspired the development of pedal-powered systems, which allowed kayakers to use the muscles in their legs and arms to propel themselves across the water and extend the distance of their voyage.

Avid kayak anglers immediately recognized the advantages of this type of “hands-free” system, since it meant that they’d now be able to easily troll and cast without ever again having to worry about dealing with a paddle at the same time.

Without a doubt, the introduction of pedal power has made one of the biggest contributions to the world of recreational kayak fishing since the inception of the original sit-on-top kayak over 40 years ago.

Today, there are a number of high-quality pedal-powered kayaks available. To help you sort through your options, we’ve put together a buying guide which includes reviews of some of the most popular choices on the market.

The advent of the pedal-powered fishing kayak has revolutionized the sport in ways that were rarely imagined before. Those who enjoy fishing in the ocean or on large, deep lakes will appreciate the fact that pedal kayaks provide access to places that can otherwise only be reached by larger, motorized crafts.

Yet, there are multitudes of seasoned kayak anglers who still prefer conventional sit-on-top kayaks that are propelled only by the use of a paddle.

Here are a few advantages and disadvantages of each style:

Nonetheless, there are also some disadvantages to these kayaks. Without a doubt, a pedal-powered kayak can cost significantly more than a conventional fishing kayak with similar features; and sometimes up to twice as much. Because of their pedal drive, they can weigh a lot more, too. This factors into how much passenger and gear weight can be onboard before the boat’s rated load capacity is reached.

The main downside to paddle-only kayaks is that they require a lot more physical endurance, and are not nearly as fast on the water as pedal-powered kayaks.

They’re generally better suited for fishing inshore than offshore, and are far more susceptible to being influenced by strong currents. They can also be blown asunder by heavy winds that could be more easily handled by a pedal-powered kayak.

In the final analysis, it’s vitally important to make sure that the features of the fishing kayak you ultimately select match your requirements and expectations for its eventual use.

Once kayakers decide to upgrade to a pedal-powered fishing kayak, a vast majority of them will choose to purchase one of the top brands on the market that are already designed and built for that specific purpose.

Nonetheless, there are still some with a do-it-yourself mindset that may want to try and modify a kayak they already own to accommodate a pedal paddling mechanism. For these folks, there’s always the alternative of buying and installing an independent pedal-drive system such as the H2Pro-Ped, with which they can convert their favorite kayak for hands-free operation.

Once again, when purchasing any kayak, it’s of prime importance to consider the activities you intend to use it for. This is particularly vital when selecting a fishing kayak that is pedal-powered.

Here are a few things to consider:

One of the advantages of owning a sit-on-top kayak is that it’s rather easy to clean and maintain. The process is usually comprised of simply hosing it off and wiping it down after each use.

The addition of a pedal drive, however, requires the same kind of maintenance and care that you would give one of your fishing reels, or any other type of mechanical unit that might be aboard your kayak. Following a few simple steps can go a long way in ensuring that your ‘yak lasts as long as possible.

Any debris that collects in your kayak should be cleared away before you store it. This includes grass, weeds, old fishing line, and most importantly, bits of sand and grit–which can cause irreparable damage if they make their way into the internal portions of the drive.

Your pedal drive should be removed and carefully hosed off with fresh water without blasting it with a powerful stream. Then, it should be thoroughly dried with a Shop-Vac or other vacuum cleaning device that is designed to remove moisture. Afterwards, apply a small amount of high-quality non-petroleum lubricant, or use a silicon-based spray to keep things moving properly.

The two most common pedal drive systems on the market today are the Hobie Mirage Drive and the Native Watercraft Propel System. This guide contains more detailed maintenance instruction for each of these models.

It’s been over a decade since Hobie revolutionized the world of pedal-powered kayak fishing with their Mirage Drive, which used push pedals and flexible fins rather than a propeller to drive a kayak through the water.

They later improved the design by adding the ability to rotate the fins 180 degrees: a valuable feature that allows you to travel backward, as well.

This model is one of Hobie’s largest and heaviest kayaks. It’s equipped with exceptionally large gear wells, both horizontal and vertical rod holders, and plenty of room for tackle storage.

It has high rails and a wide beam, which allows an angler to stand up on the deck and cast. It also makes it a perfect candidate for battling fish offshore or on large, deep water lakes.

Old Town Canoes & Kayaks is a company based in Maine that has been building these types of boats for over a century. The Old Town Predator PDL, however, is their first model that offers hands-free pedal power to move it through the water.

Unlike Hobie’s Mirage Drive, the PDL bicycle-style system is propeller-driven and offers a few advantages over the Mirage Drive system.

It doesn’t protrude as far down in the water, which allows you to fish the skinny water more easily without hanging up on bottom structure. You can also go backward by simply reversing the pedal direction, and the drive can be adjusted to conform to shallower venues.

The Old Town Predator PDL is also fitted with mounting plates that you can use to attach a wide variety of electronics. There are also six spots where you can mount virtually anything from pole holders to a GoPro video camera.

This fishing kayak has been rated as one of the most comfortable for taking on longer angling trips. It comes with a comfy captain’s chair that’s covered with durable fabric for longer life and is also fully adjustable to match your height, weight, and positional preferences.

The Native Watercraft company was the first to introduce a pedal-powered fishing kayak that was capable of going in reverse as well as in a forward motion.

In fact, their Propel Drive system is so effective that it’s been emulated by several other manufacturers who also employ a bicycle-style pedal drive and propeller to manually power the kayaks they build.

The Propel 13 features a unique tunnel hull design, which improves its stability and allows it to move through the water more effortlessly.

It also features an elevated frame seat that helps to keep the angler positioned just above the deck and allows you to stand and cast in confidence.

This high-capacity kayak will hold a lot of gear. It’s already outfitted with everything–from rod holders to gear tracks–so you can mount all of your favorite electronic toys. It’s an excellent turnkey choice for those who want to start fishing in their new kayak almost immediately after purchasing it.

For a pedal-powered kayak, the Perception Pescador Pilot 12.0 is exceptionally light; yet it is still designed for stability, and can be fished from a standing position if you like. The Pilot Drive mechanism is virtually silent, but still delivers powerful propulsion.

The captain’s chair is so comfortable that it seems more appropriate for an admiral, and features a mesh backing that helps enhance airflow and wick out evaporation on hot days.

There’s also a transducer scupper already installed to accommodate all of your sonar devices.

The oversized, bungee-laced storage wells situated both fore and aft can hold a lot more gear than many other pedal-powered kayaks, and four large rod holders are conveniently positioned behind the seat.

The hull of the Pescador Pilot is designed to be used in a wide variety of venues, including lakes, rivers, bays, lagoons and even the open ocean on calmer days.

When it came to basic features like storage space, rod holders and mounting racks, almost all of our candidates were fairly closely matched.

Nonetheless, the majority of pedal-powered kayaks that we assessed rely upon a bicycle style pedal and propeller system to provide hands-free power to the craft.

The only major advancement in this technology over the years has been Hobie’s patented Mirage Drive system, which uses larger retractable fins to propel their kayaks with a push pedal system.

The Hobie Mirage Drive gives a palpable advantage to anglers who want to travel longer distances in order to find the fish–a feature that is particularly valuable to those who enjoy fishing offshore for larger oceanic species.

When teamed up with a wider, heavier kayak like the Hobie Pro Angler 14, you have a world class fishing machine that can handle just about any type of venue where you might want to fish.

That’s why we selected the Hobie Mirage Drive as our top choice in the field of tournament-grade, pedal-powered fishing kayaks.

Enjoyed Best Pedal Fishing Kayaks: Buying Guide and Reviews? Share it with your friends so they too can follow the kayakhelp journey. 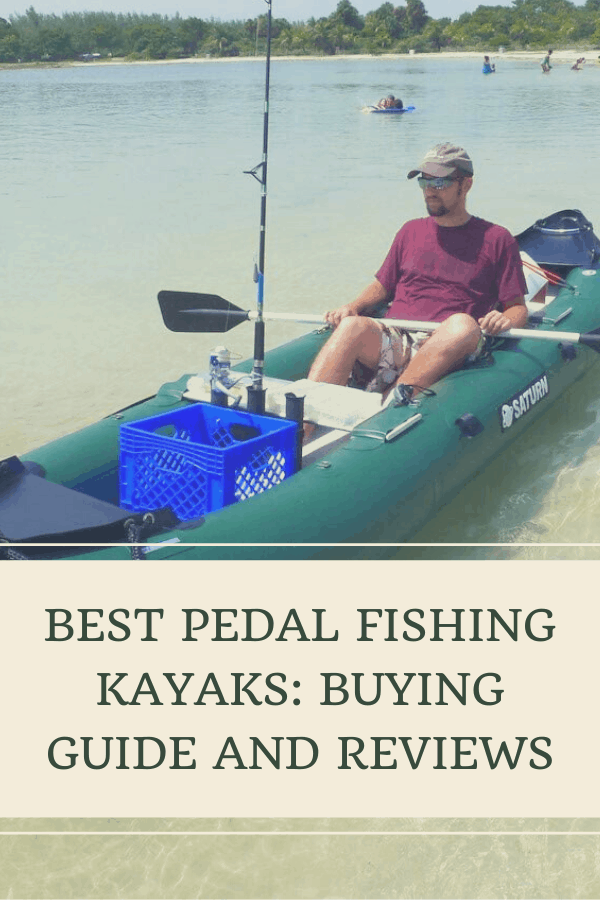