What Should You Do If Approaching a Low-Head Dam in a Kayak?

What Should You Do If Approaching a Low-Head Dam in a Kayak?

Low-head dams are often referred to as “drowning machines”, a nickname they have very much earned. Easily the most dangerous type of dam, the low-head is a significant hazard to nearly any water-going craft, but is especially perilous to kayakers. Between 1960 and 2016, there were 377 fatal accidents on low-head dams in the US, with half of those victims being kayakers and other paddlesports enthusiasts.

Why Are They so Dangerous?

They aren’t always marked, or even inventoried.

They are difficult to see, especially from a kayak.

Because a low-head dam is fully submerged, they can often be very difficult to spot. This is especially true if you are in a kayak and do not have the necessary elevation to see the area of disturbed water in the dam’s wake that often indicates its presence.

One of the most dangerous things about low-head dams is that the water going over the dam creates a strong circulating current that is often referred to as “the boil.” The boil is often compared to an underwater washing machine that drags kayaks, kayakers, and even boats under the water and pins them to the face of the damn. If you are caught in the boil, it can stop you from swimming or paddling away while also trapping you underwater. The hydraulic pressure of the boil also pulls in and traps obstacles likes bits of wood and stone, creating a whirling area of debris underwater.

Rescue is difficult if not impossible.

A low-head dam is as dangerous to boats as it is to kayaks and on several occasions, rescue boats have been sucked in and capsized while trying to retrieve people caught in the boil. Personal flotation devices are also no protection against the hydraulic pressures of the boil, and while we suggest every kayaker wears one at all times, they will not save you if the dam capsizes your kayak.

How to Avoid Them

The best way to avoid coming into contact with a low-head dam is to do your research before setting out on your kayaking adventure. Check on maps of local waterways and consult with other kayakers who have local knowledge. Many states have online maps of low-head dams for just this purpose, like this one for Ohio.

When you are out on the river, it is essential to keep your eyes open and make sure you are in a position to notice any warning signs that indicate would indicate the presence of a low-head dam.

What Should You Do If You Spot One

Avoid it at all costs.

There is no proper technique for safely going over a low-head dam and should not be attempted in any circumstances. If you know the location of the dam, see a warning sign, or even suspect that there might be one ahead of you then the best and safest option is to avoid it at all costs.

Paddle to the shore.

If you suspect you are approaching a low-head dam, it is imperative that you get out of the water. Paddle over to a section of the shoreline where you can safely exit your kayak and get off the river.

Portage around the dam.

Once you are out of the water, you can circumnavigate the dam by portaging your kayak around it. If you choose to do this, then you will need to move a reasonable distance down the river from the dam, as the area of disrupted water it causes can be extended by a significant distance.

The most important thing to remember when it comes to low-head dams is that they are incredibly dangerous, especially to kayakers, and there is no safe way to negotiate one. The only way to safely navigate your way past a low-head dam is to avoid it entirely. Not all of them are marked on maps or are properly signed, so its important that you keep a vigilant watch for them and, if you notice one, the safest option is to paddle over to the bank, get out, and portage your kayak around it.

Enjoyed What Should You Do If Approaching a Low-Head Dam in a Kayak? Share it with your friends so they too can follow the KayakHelp journey. 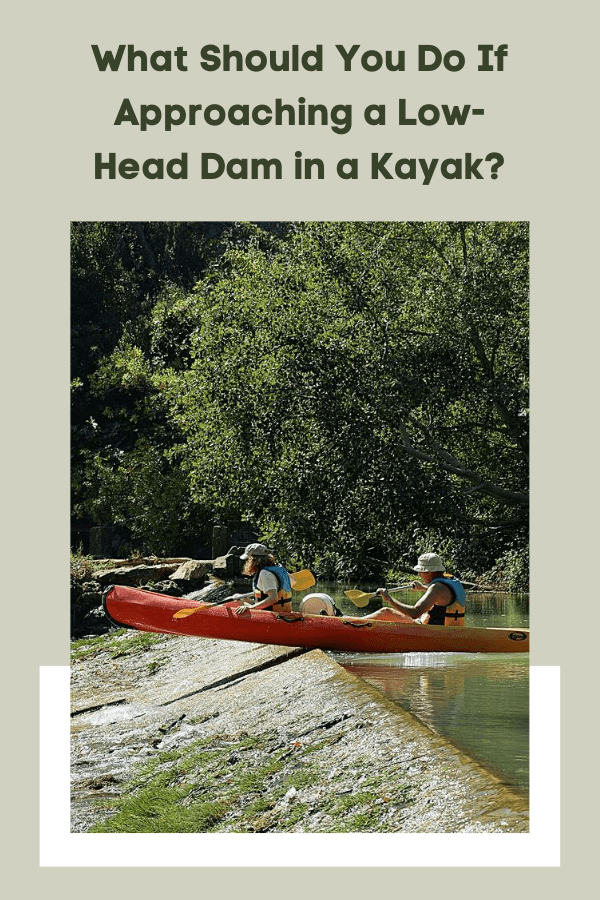