Canoeing and kayaking, while both involving boats and paddling, are two separate sports that involve different paddles, boat types, and techniques.

Today, I’ll explain the differences between kayaking and canoeing and then go into more detail about the specifics of each Olympic sport.

Canoeing vs Kayaking: Is There Any Difference? 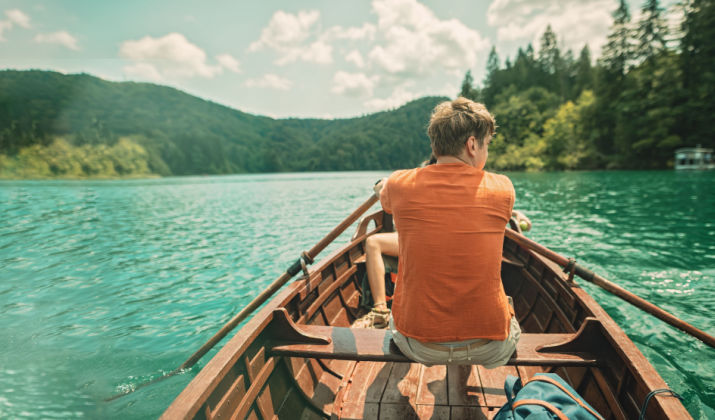 While many people confuse the two types of boats, kayaks and canoes are pretty different. Not only is the boat design different, but how you sit in the boat and even how you paddle are different.

The differences between canoeing and kayaking start with the actual design of each boat.

A canoe is usually entirely open at the top. This open deck allows for more freedom of movement, allowing people to move around the boat freely.

Most kayaks, on the other hand, have closed decks. There is typically a hole in the deck with a place for the person to sit inside, so they can keep their entire lower body under the deck.

There are some advantages to this. For example, it allows you to keep your lower body dry and warm, even if you are kayaking in cold waters.

Some kayaks don’t have a hole in the cockpit. They are called sit-on-top kayaks and have a small cutout space for you to sit.

Overall, kayaks are longer, narrower, and lighter than canoes. That makes them easier to maneuver, increasing agility on the water.

It’s also easier to transport a kayak than a canoe. 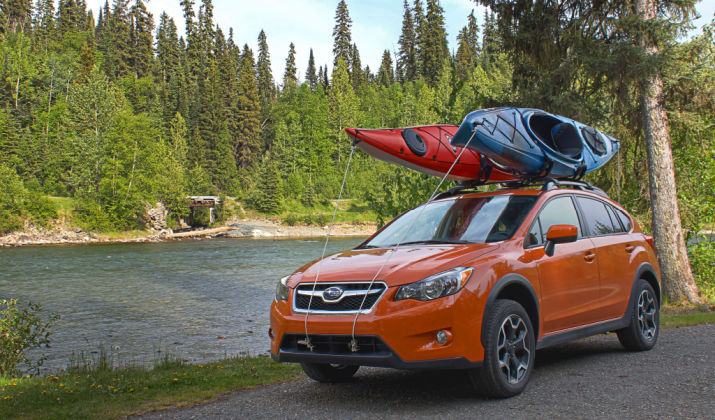 Canoes, on the other hand, tend to be heavier. They can typically hold much more weight than kayaks, which means they are great for transporting loads and groups of people.

However, this extra weight also means they are slower, so getting a canoe to go as fast as a kayak will take more energy. At the same time, canoes are also a lot more stable than kayaks.

There is a lower risk of capsizing in a canoe than in a kayak, although it can still happen. 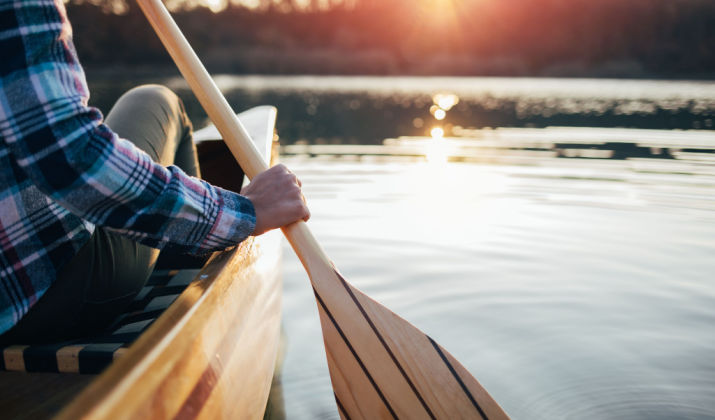 Canoers use a single-bladed paddle.

Kayakers, on the other hand, use double-bladed paddles. There are blades on both ends, which makes it easy to switch from one side to another and move your boat forward. 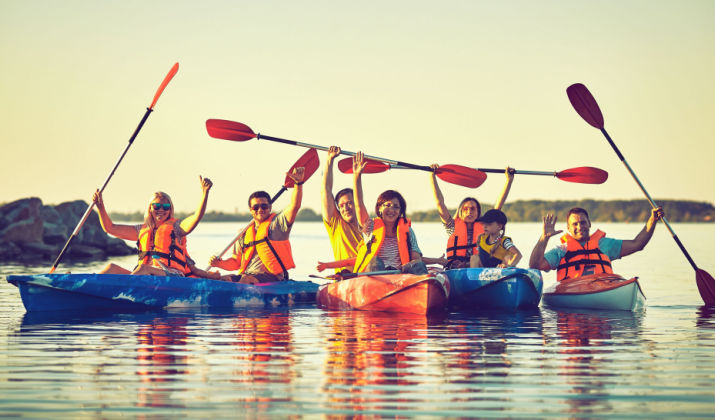 All you have to do is grasp the middle of the paddle with both hands and paddle on both sides.

Another difference is that canoe paddles tend to be shorter than kayak paddles.

Often, paddling a kayak requires less energy and strength than a canoe. Not only that, but since a kayak is lighter, canoeing is typically a bit more physically demanding than kayaking.

You can get kayak paddles of different sizes, too, to make things easier.

Canoes are better for two people than for one. While it’s possible to paddle a canoe by yourself, it’s significantly more complicated than a kayak.

Can you use a kayak paddle in a canoe? Find out here! 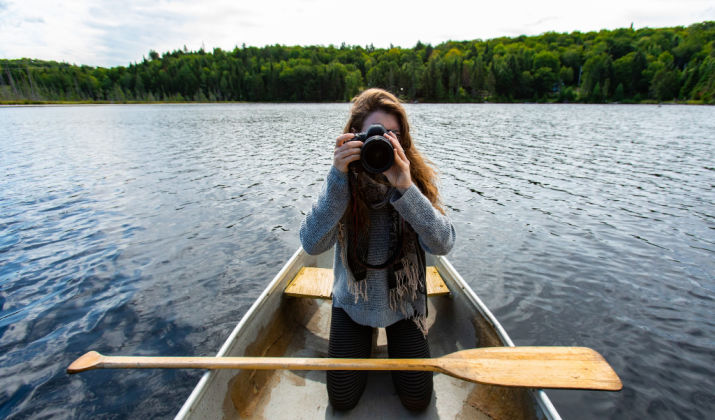 Canoes typically come with a few short seats, but many canoers prefer not to sit but instead kneel. That allows them to generate more power.

Kayakers, on the other hand, tend to sit in the cockpit.

Canoeing vs Kayaking: Which One Is Right for You?

We’ll soon discuss the differences between kayaking and canoeing in the Olympics. However, which one should you choose for your own enjoyment?

Let’s go over the main pros and cons of canoes and kayaks, so you can make a more informed decision.

Canoeing and Kayaking in the Olympics: A Brief History

Both canoeing and kayaking are featured in the Olympics. While canoeing was a demonstration sport as far back as the 1924 Games in Paris, it has been an official part of the Olympics since the 1936 Games in Berlin.

There are typically two types of canoe and kayak events in the Olympics: the slalom and the sprint.

The number of gates can vary, but there must be at least six upstream gates and not more than 25 gates overall. Each course is not longer than 300 meters.

Competitors have between 90 and 110 seconds to get through the course. Doing so in the shortest amount of time possible requires a lot of skill and the ability to read the waters while maintaining balance and trajectory. 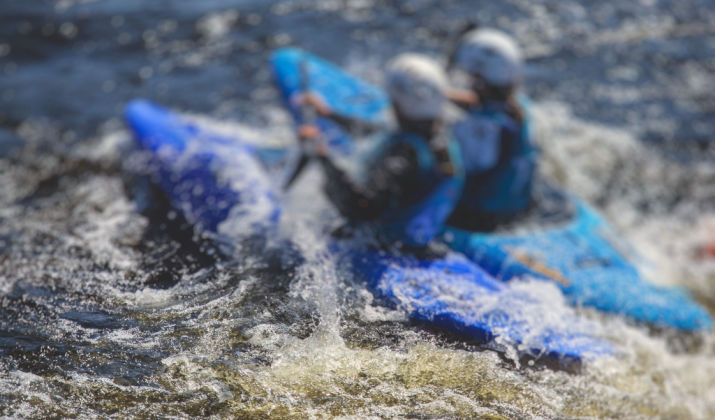 Each course is different and presents unique challenges and water conditions, such as eddies and stoppers.

However, if competitors violate specific rules, they face penalties like a reduction in the allotted amount of time they have to finish the course. Competitors only lose two seconds if they touch a gate, but they lose a whopping 50 seconds if they miss a gate.

The slalom was first introduced into the Games in 1972 in Munich. However, slalom canoeing itself was invented way back in 1933 as an alternative to slalom skiing for summer competitions.

For whatever reason, Slovakia seems to send the best slalom canoers to the Olympics. It holds the record for the most gold medals in slalom canoeing, and the only three Olympic competitors who own more than three medals each from slalom canoeing at The Games are all from Slovakia.

In fact, it is the only sport Slovakia has ever won a title in at the summer Games, so kudos to them.

So, if the canoe slalom was only introduced to the Games in 1972, what were people doing in earlier canoe and kayak competitions since 1936? The answer is the canoe sprint, another type of Olympic competition.

The canoe sprint is straightforward and easy to understand. A line is set at a certain distance, and competitors must race to cross the line before other competitors get there.

There are four distances, ranging from 200 meters to 5000 meters. People can compete individually or in teams of up to four people.

Hungary is the big winner when it comes to the canoe sprint in world competitions, holding a whopping 194 titles. Thirty-one of those titles have been claimed by a single individual, Katalin Kovács, who holds the record for the most titles held by one person. 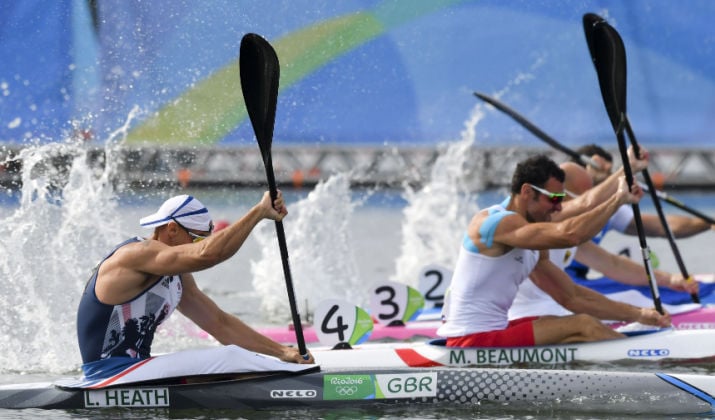 In the Olympics specifically, Hungary also comes out at the front, holding 77 medals in the canoe sprint, more than any other country. However, Birgit Fischer, a German medalist, has the most medals held by any individual.

The Canoe vs Kayak in the Olympics

While the rules are the same for both canoes and kayaks, whether it’s the slalom or sprint, there are differences in boat design and how the competitors sit and paddle.

In the slalom, canoers kneel on both of their knees, with their legs tucked under their bodies. Athletes are strapped into the boats, and they use a single-bladed paddle.

Kayakers, on the other hand, sit in the cockpit and use a double-bladed paddle to propel the boat forward while paddling on alternate sides of the boat. 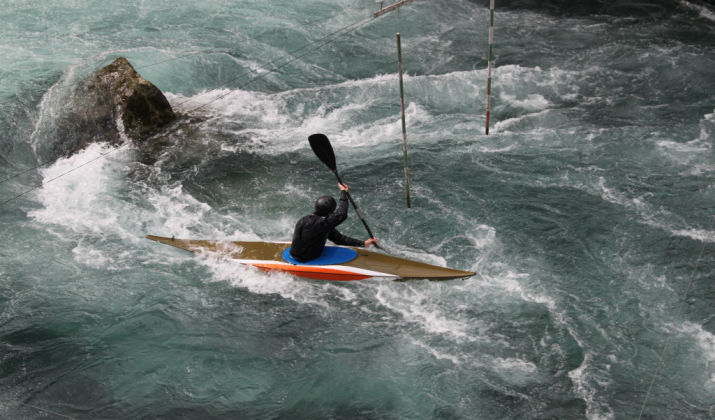 The kayaker’s position remains the same: seated in the cockpit and using a double-bladed paddle to propel the boat forward by paddling on alternate sides.

Canoers in the sprint, however, have one knee on the deck with the other leg forward. That gives them the best chance to paddle on either side of the canoe with their single-bladed paddles.

Canoe and kayak events at the Olympics are represented by different numbers and letters. To a first-timer, it can be pretty confusing, so let’s go over the different event names and what they mean.

Let’s start with the basics: C stands for canoe, and K stands for kayak. If an event is labeled with the starting letter C, you know it is a canoe slalom or sprint.

There are four disciplines together:

Let’s review the current program for the canoe and kayak sprint in the Olympics.

Here are the men’s competition labels for the current program:

Here are the labels for the women’s competition:

Starting in 2024 at the Games in Paris, there will be another discipline of canoeing at the Olympics: the Extreme Slalom. It first appeared on the ICF’s World Cup Program back in 2015, and it’s a heart-stopping event to watch.

It starts with four competitors sliding off a ramp that is 10 feet tall, with all of them landing in the water at the same time. There are both upstream and downstream buoys that paddlers need to navigate, but there is an element of bumper cars as well.

Contact with the boats of other competitors is permitted in the Extreme Slalom, adding to the fun and allowing competitors to gain an advantage over the others they are racing.

If you can knock someone out of the way, you can get ahead of them and win, but you must also be able to maintain your control and keep your trajectory when someone else tries to knock you out of the way.

A compulsory Eskimo roll is included. Competitors must complete the full 360-degree roll in a specified amount of time, and all that is done on raging rapids.

What makes it even harder is that you must complete the Eskimo roll in a specific area. If you fail to do so, you automatically become disqualified.

There are other ways to become disqualified, according to the ICF. For example, paddling dangerously or breaking the start are two ways to get excluded.

Not only are the rules and required skills vastly different, but the boats are different as well. Instead of light carbon boats, competitors use plastic creek boats, which are heavier.

In the 2024 Summer Olympics, the slalom events will be held from the 27th of July until the 5th of August. The sprint events will come next over a period of four days.

You can learn more about the 2024 Olympics, the specific canoe and kayak events that will be held, dates, and other details here.

Hopefully, you now not only understand the differences between canoeing and kayaking but also have a pretty good grasp of how both canoers and kayakers participate in the Olympics.

You should also check out our article on the most famous kayakers in the world.

If you liked this article, please share it with a friend!

Enjoyed Olympic Canoe vs Kayak – What’s The Difference? Share it with your friends so they too can follow the Kayakhelp journey.