Spending a lot of time on a dock or out on the water gets boring even for the most avid angler. That’s why it helps to have a few jokes or funny sayings in your back pocket when you and your fishing buddy are hanging out.

There’s always something to be said for being original, but there’s no shame in regurgitating some tried-and-true funny fishing quotes. Many famous people have called fishing their favorite pastime, which has produced some pretty funny quotes about this sport.

Whether you’re out on a tandem fishing kayak or one of the most expensive fishing boats, it pays to have a few friends with a good sense of humor along for the ride. If you want to be able to add your own jokes to the mix, check out this extensive collection of funny fishing quotes! 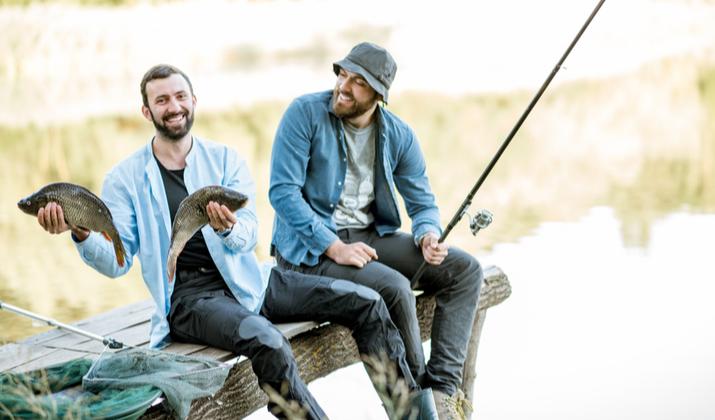 Photo by RossHelen via Shutterstock

Why Are Anglers So Funny? 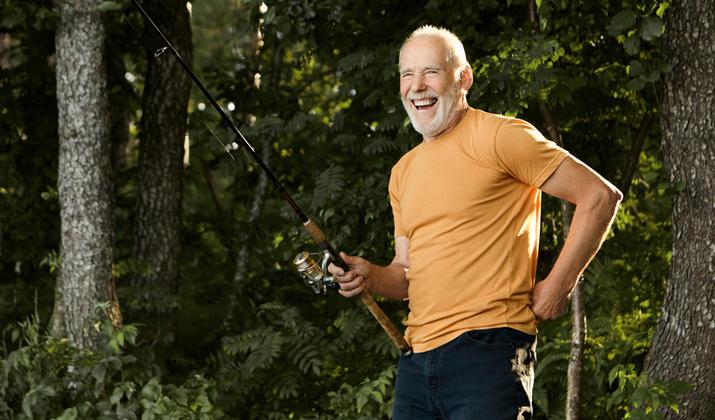 Photo by Anatoliy Karlyuk via Shutterstock

Despite centuries of research, no one quite knows why fishermen seem to have such a great sense of humor. From our experience, however, we have decided on several factors that could account for the humorous nature of the angler.

None, some, or all of these could be true, but the funny fishing quotes we’ve collected below certainly came from somewhere!

1. “Fish come in three sizes: small, medium and the one that got away!”

2. “Dear Lord, give me the serenity to accept the size of fish I catch, the courage not to lie about it and the wisdom to know that none of my fishing buddies would believe me anyway!”

6. “Something to think about: If you fish the wrong fly long and hard enough, it will sooner or later become the right fly.”  ~ John Gierach

7. “Good things come to those who BAIT.”

8. “Fly-fishing is the most fun you can have standing up.”

9. “There’s a fine line between fishing and just standing on the shore like an idiot.”  ~ Steven Wright

10. “Give a man a fish and he will eat for a day. Teach him how to fish, and he will sit in a boat and drink beer all day.”  ~ George Carlin

11. “A woman who has never seen her husband fishing, doesn’t know what a patient man she married!”

12. “If people concentrated on the really important things in life, there’d be a shortage of fishing poles.”  ~ Doug Larson

13. “An angler is a man who spends rainy days sitting on a muddy bank of rivers doing nothing because his wife won’t let him do it at home.”

14. “Fishing is like dating; it’s all catch and release until you find a keeper.”

15. “Many men go fishing all of their lives without knowing that it is not fish they are after.”  ~ Henry David Thoreau

16. “My biggest worry is that my wife (when I’m dead) will try to sell my fishing gear for what I said I paid for it.”  ~ Koos Brandt

17. “Fishing, with me, has always been an excuse to drink in the daytime.”  ~ Jimmy Cannon

18. “The solution to any problem -work, love, money, whatever -is to go fishing, and the worse the problem, the longer the trip should be.”  ~ John Gierach

20. “Sell a man a fish, he eats for a day, teach a man how to fish, you ruin a wonderful business opportunity.”

23. “Don’t tell fish stories where the people know you; but particularly, don’t tell them where they know the fish.”  ~ Mark Twain

24. “Remember when your GPS and a fish finder were rolled into one trusty unit called grandpa?”

26. “Bragging may not bring happiness, but no man having caught a large fish goes home through an alley.”  ~ Ann Landers

27. “I look into my fly box, and think about all the elements I should consider in choosing the perfect fly: water temperature, what stage of development the bugs are in, what the fish are eating right now. Then I remember what a guide told me: ‘Ninety percent of what a trout eats is brown and fuzzy and about five-eighths of an inch long.”  ~ Alison Moir-Smith

28. “Give a man a fish, and he has food for a day. Teach him how to fish and you can get rid of him for the entire weekend!”

29. “Guests, like fish, begin to smell after three days.”

32. “Women know why men love to go fishing. It is the only time they will hear the words “wow, that’s a big one!””

33. “Fish: An animal that grows fastest between the time it’s caught and the time a fisherman describes it to his friends”

34. “If you don’t like fishing, raise your hand! —- Now slap yourself because you are an idiot!”

35. “Comedians get jokes offered to them, rock stars get women and underwear thrown on stage, and I get guys that want to take me fishing.”  ~ Les Claypool

36. “I do hunt and I do fish, and I don’t apologize to anybody for hunting and fishing.”  ~ General Norman Schwarzkopf

37. “Fishing is a delusion entirely surrounded by liars in old clothes.”  ~ Don Marquis

39. “I once gave up fishing. It was the most terrifying weekend of my life.”

40. “Somebody behind you, while you are fishing, is as bad as someone looking over your shoulder while you write a letter to your girl.”  ~ Ernest Hemingway

41. “There are only two occasions when Americans respect privacy, especially in Presidents. Those are prayer and fishing.”  ~ Herbert Hoover

43. “I’ve managed to convince my wife that somewhere in the Bible it says, “Man cannot have too many shotguns and fishing poles’.”  ~ General Norman Schwarzkopf

44. “I only make movies to finance my fishing.” ~ Lee Marvin

45. “There he stands, draped in more equipment than a telephone lineman, trying to outwit an organism with a brain no bigger than a breadcrumb, and getting licked in the process.”  ~ Paul O’Neil

46. “Three-fourths of the Earth’s surface is water, and one-fourth is land. It is quite clear that the good Lord intended us to spend triple the amount of time fishing as taking care of the lawn.”  ~ Chuck Clark

47. “We ask a simple question and that is all we wish… Are all fishermen liars or do only liars fish?  ~ William Sherwood Fox

48. “The only thing bad about winning the pennant is that you have to manage the All-Star Game the next year. I’d rather go fishing for three days.”  ~ Whitey Herzog

49. “It’s okay to eat fish because they don’t have any feelings.”  ~ Kurt Cobain

50. “Scholars have long known that fishing eventually turns men into philosophers. Unfortunately, it is almost impossible to buy decent tackle on a philosopher’s salary.”  ~ Patrick McManus

52. “Nothing makes a fish bigger than almost being caught.”

54. “Calling fishing a hobby is like calling brain surgery a job.”  ~ Paul Schullery

55. “…of all the liars among mankind, the fisherman is the most trustworthy.”  ~ William Sherwood Fox

56. “You need a good gardener and a good fisherman. The cook is not required.”  ~ Alain Ducasse

58. “Most of the world is covered by water. A fisherman’s job is simple: Pick out the best parts.”  ~ Charles Waterman

59. “All the romance of trout fishing exists in the mind of the angler and is in no way shared by the fish.”  ~ Harold F. Blaisdell

60. “The best way to a fisherman’s heart is through his fly.”

61. “Creeps and idiots cannot conceal themselves for long on a fishing trip.”  ~ John Gierach

63. “What a tourist terms a plague of insects, the fly fisher calls a great hatch.”  ~ Patrick F. McManus

65. “Even if you’ve been fishing for three hours and haven’t gotten anything except poison ivy and sunburn, you’re still better off than the worm.”

68. “Many men go fishing all of their lives without knowing that it is not fish they are after.”  ~ Henry David Thoreau

71. “Sometimes, when the water is quiet, you can almost hear the fish laughing at you.”

72. “Of course I talk to myself when I’m fishing. Sometimes I need expert advice.”

73. “Procrastifishing: the art of going fishing when you should be doing something else.”

75. “My dad was a fisherman, but he quit because his net income wasn’t enough.”

77. “There is no losing in fishing. You either catch or you learn. Either way, it’s better than work.”

78. “Fishing is the sport of drowning worms.”

79. “I am not against golf, since I cannot but suspect it keeps armies of the unworthy from discovering trout.”  ~ Paul O’Neill

80. “It has always been my private conviction that any man who pits his intelligence against a fish and loses has it coming.” ~ John Steinbeck

82. “If I fished only to capture fish, my fishing trips would have ended long ago.”  ~ Zane Grey

84. “All Americans believe that they are born fishermen. For a man to admit a distaste for fishing would be like denouncing mother-love or hating moonlight.”  ~ John Steinbeck

86. “There is no use in walking five miles to fish when you can depend on being just as unsuccessful near home.”  ~ Mark Twain

89. “Many of the most highly publicized events of my presidency are not nearly as memorable or significant in my life as fishing with my daddy.”  ~ Jimmy Carter

90. “A fisherman is a jerk on one end of the line waiting for a jerk on the other.”

92. “All fishermen are liars; it’s an occupational disease with them like housemaid’s knee or editor’s ulcers.”  ~ Beatrice Gray Cook

94. “As the evening sky faded from a salmon color to a sort of flint gray, I thought back to the salmon I caught that morning, and how gray he was, and how I named him Flint.”  ~ Jack Handey

95. “Always think like a fish, no matter how weird it gets.”

96. “Even a fish wouldn’t get into trouble if he kept his mouth shut.”

97. “Even eminent chartered accountants are known, in their capacity as fishermen, blissfully to ignore differences between seven and 10 inches, half a pound and two pounds, three fish and a dozen fish.”  ~ William Sherwood Fox

98. “Fisherman’s prayer: Lord, help me to catch fish so large, that even I, in the telling of it, never need to lie.”

99. “Everyone should believe in something. I believe I’ll go fishing.”  ~ Henry David Thoreau 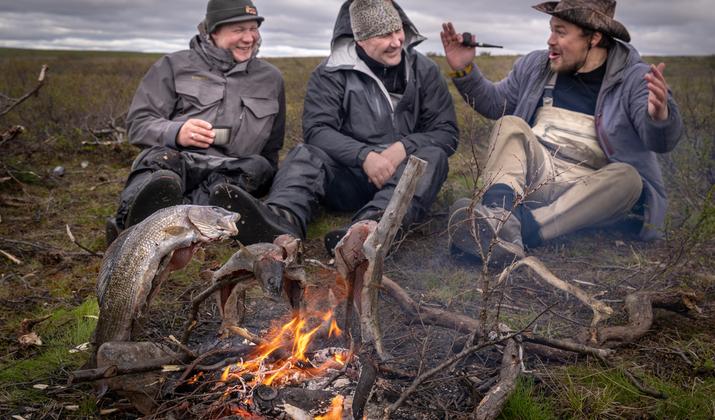 Photo by oknemada1 via Shutterstock

From all of us here at Kayak Help, we hope you’ve enjoyed this collection of funny fishing quotes. It makes us smile hoping we brought even the slightest smile (and hopefully a little chuckle) to your face!

Enjoyed 100 Funny Fishing Quotes? Share it with your friends so they too can follow the Kayakhelp journey.